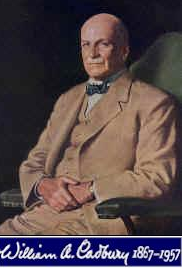 Founded in 1923 by William Cadbury to further his charitable interests.

William was the second son of Richard Cadbury, who, with his younger brother George, started the manufacture of chocolate under the Cadbury name. He came from a family with strong Quaker traditions which influenced his whole life. It was this Quaker ethos which underpinned his commitment to the advancement of social welfare schemes in the City of Birmingham.

William Cadbury established the Trust soon after his two years as Lord Mayor of Birmingham from 1919 to 1921, wishing to give more help to the causes in which he was interested. One such was the building of the Queen Elizabeth Hospital, a medical centre with the space and facilities to bring together the small specialised hospitals scattered throughout Birmingham, giving them the benefit of up to date buildings, shared administration, shared services and hostels for nurses. He did much to encourage the City Library, the Art Gallery and a wide circle of Midland artists who became his personal friends. Through this charity, he also secured several properties for the National Trust.

As time went on, members of his family were brought in as trustees and this practice has continued with representatives of the next three generations becoming trustees in their turn, so that all the present trustees are his direct descendants. William Cadbury was followed as chairman by his son John (1905-1985); his son Brandon (1915-2011); his granddaughter Sarah Stafford and the current chair, his great-granddaughter Sophy Blandy.

Today trustees are guided by William Cadbury’s concern for the welfare and well-being of the inhabitants of Birmingham and the surrounding area, his interest in the work of the Society of Friends at home and abroad and his belief in the continuing need for Penal Reform. Overseas grant making reflects his love of Ireland and his interest in West Africa where he pioneered the commercial production of cocoa in the first decade of the twentieth century.